The UK has signed an agreement to deliver warships and missiles to Ukraine as 90,000 Russian troops crowd the country’s border amid mounting tensions in the region.

Defense Secretary Ben Wallace signed a treaty with Ukraine last week, under which the country’s government can access contract funding with UK suppliers to help boost its naval capabilities.

In response, Moscow complained that the deal would boost Ukraine’s navy, which it said showed British military activity was expanding near its borders.

Pictured: HMS Brocklesby arrives in Portsmouth on October 8, 2021. The UK has signed an agreement to supply anti-mine warfare ships (similar to HMS Brocklesby) and missiles to Ukraine as Russian troops mass on the country’s border and amid growing tensions with the Kremlin

It comes after Boris Johnson warns Vladimir Putin not to make a “tragic mistake” as tensions mount on the Russian-Ukrainian border.

The Prime Minister, present at the Commons Liaison Committee, was questioned about the problems between Belarus and Poland and the situation in Ukraine.

Thousands of migrants, mainly from the Middle East, have been gathering for months on the Belarusian border with Poland.

Brussels accused authoritarian Belarusian President Alexander Lukashenko, a close ally of Russian President Vladimir Putin, of deliberately encouraging migrants to cross its borders in retaliation for sanctions imposed by the EU in response to his repressive regime.

But information released on Wednesday suggested that hundreds of people had been moved to a nearby warehouse in Belarusian territory.

Downing Street also raised concerns about the build-up of Russian forces on Russia’s border with Ukraine. 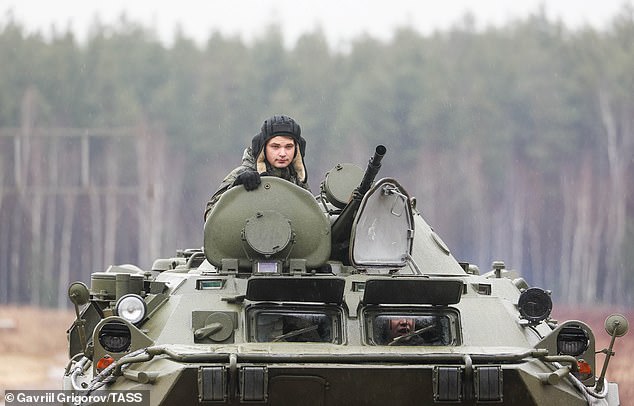 Pictured: A Russian soldier trains in a tank in the woods on November 11 amid mounting tensions between Russia and the West over the build-up of troops on its border with Ukraine

The Kremlin has dismissed claims that it is preparing to invade, after Ukraine’s Defense Ministry reported that around 90,000 Russian troops were in the area.

Mr Johnson said the two cases are “very different” as Poland has a NATO security guarantee, which means any action against it could trigger an alliance-wide response .

Ukraine doesn’t have the same NATO guarantee, “so what we need to do is make sure everyone understands that the cost of miscalculation on the borders of Ukraine and the Poland would be huge ”.

“I think it would be a tragic and tragic mistake for the Kremlin to think that there was something to be gained,” Mr Johnson said.

A joint statement by Mr Wallace and Ukrainian Defense Minister Oleksii Yuriyovych Reznikov said: “Ukraine and the UK are strategic partners in security and defense.

“Last week an intergovernmental framework agreement was signed in London.

“This document continues the progress of joint projects aimed at developing the capabilities of the Ukrainian Armed Forces’ naval forces, as agreed in June when the UK, Ukraine and industry signed an implementation protocol to work together to to strengthen Ukraine’s naval capabilities. “ 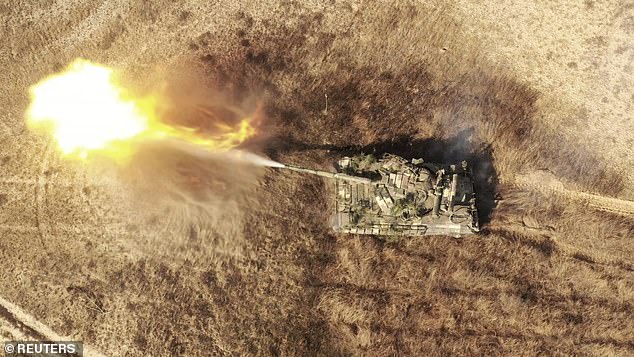 Pictured: A Ukrainian Armed Forces tank fires during military exercises at a training ground near the border with Russia-annexed Crimea in the Kherson region of Ukraine on November 17, 2021

He said: “Our governments have no desire to be antagonistic, or to seek in any way to strategically surround or undermine the Russian Federation. We are concerned about the strengthening and military activity of Russia around the borders of Ukraine.

“The national sovereignty and territorial integrity of Ukraine is indisputable.

“The UK stands with the Ukrainian people and will continue their longstanding determination to support them.

“We are unwavering in this support and together we remain vigilant and united in the defense of our common values ​​and freedoms.”

Russia has responded to such concerns by denying that it is threatening anyone, by criticizing “alarmist” reports and by asserting its right to deploy its troops as it pleases on its own territory.

Russia on Wednesday complained about the deal that would bolster Ukraine’s navy, which it said showed British military activity was expanding near its borders.

Moscow has expressed objections to a framework agreement under which Ukraine will use British funding to bolster its naval capabilities, allowing it to purchase missiles and build missile ships and a naval base in the Sea of Azov. 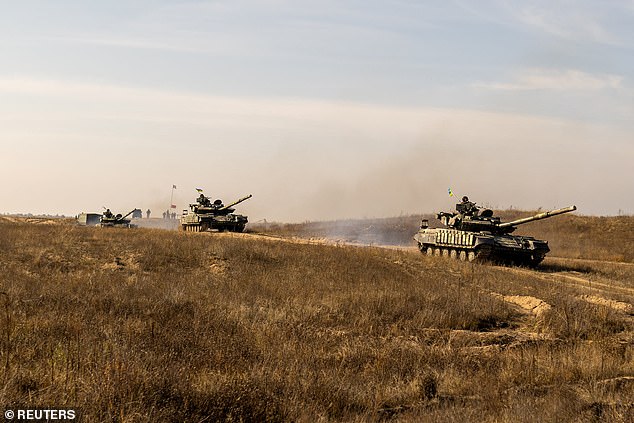 Russia complained about the deal that would boost Ukraine’s navy, which it said showed British military activity was expanding near its borders. Pictured: Tanks from the Ukrainian armed forces drive during military exercises at a training ground near the border with Russia-annexed Crimea in the Kherson region of Ukraine on Wednesday

“We regard this fact as the latest practical evidence of increased British military activity in Russia’s border states, in particular Ukraine,” Russian Foreign Ministry spokeswoman Maria Zakharova said. , during a weekly briefing.

Her comments have added to a string of statements in recent weeks in which Russia has expressed increasingly vehement opposition to Western military support of any kind to Ukraine, not to mention the possibility of it joining. NATO.

Ukraine and Russia have been enemies since 2014, when Moscow seized Ukraine’s Crimean peninsula and supported a rebellion in the east.

Tensions between Russia and the West over Ukraine have escalated recently amid reports of a military build-up of Russia near the Ukrainian border.

Russia has dismissed the claims, saying it poses no threat and can move troops to its territory if it deems it necessary.

Despite its denial, Russia also announced Wednesday that it would deploy a new parachute regiment to annexed Crimea by early December.

The Russian military said it would establish the new regiment on the Russian peninsula annexed to Ukraine in 2014, completing a force reshuffle touted by Defense Minister Sergei Shoigu in March, the Interfax news agency reported. .

Ukraine and NATO countries have expressed concern over Russian troop movements near Ukraine’s borders, while Moscow in turn accused Ukraine, the United States and its allies of destabilizing behavior , including in the Black Sea.

Ukraine’s defense ministry said on Wednesday that its armed forces had conducted exercises near the borders of Crimea.