The remarkable and little-known story of the coastal forces of the Royal Navy, which made such an extraordinary contribution to the two world wars, will be told for the first time in a new large permanent gallery inaugurated on Saturday 9 October.

The Night Hunters: The Royal Navy’s Coastal Forces at War opens at the National Museum of the Royal Navy’s Explosion Museum of Naval Firepower, Gosport and honors the small group of courageous young men, often volunteer reservists, who piloted the craft wooden who were heavily armed, carrying ammunition, explosives and high octane fuel as they attacked enemy naval forces at close range. It is said to be the closest thing to hand-to-hand combat experienced in the Royal Navy during World War II and their service was recognized with an unprecedented 3,000 decorations, including four Victoria Crosses.

The National Museum of the Royal Navy (NMRN) worked in partnership with the Coastal Forces Heritage Trust (CFHT), to finance and develop the new gallery which is located in the old historic mine store built in 1899 at Priddy’s Hard, the weapons depot that supplied weapons, ammunition and equipment to the Royal Navy, which now houses the Explosion Museum. The CFHT was funded by fines imposed on the banking sector for manipulating the LIBOR rate. Lockheed Martin is also a corporate partner in the project.

At the center of the gallery are two of the historic ships of WWII, the Coastal Motor Boat CMB331 and the Motor Torpedo Boat MTB71, which made extraordinary contributions to naval warfare. Immortalized as the “Spitfires of the Seas”, they were often deployed in the dark, at incredibly high speeds as small but fast attack craft traveling at speeds of up to 35 knots.

CMB 331 was commanded by Captain Derek ‘Jake’ Wright who quickly gained a reputation for bringing his crew back to life. He was one of 44 who were awarded three Distinguished Service Crosses during WWII and after the war he became director of the Brooke Bond tea company. The gallery displays some of his personal items, including a uniform that by modern standards would have barely managed to protect the crew from the elements.

Rare photographs capture the intensity of service in the coastal forces and the antics of the crews. Due to the stealthy nature of their operations, there are few photographs of them in action. Sketches, notebooks and some of the most personal ephemeral documents provide a fascinating glimpse into the lives of these everyday heroes. 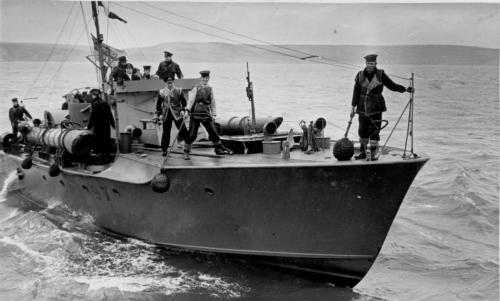 The larger objects on display include a Holman searchlight, a relatively rudimentary air-powered anti-aircraft weapon that was an effective interim measure to deter German planes; a Mark 11 Oerlikon anti-aircraft gun and a floating acoustic mine, representative of the several thousand laid down by ships.

A captivating audiovisual display vividly recreates the drama and adrenaline of a nighttime torpedo boat (ATV) attack on a convoy.

The crew, although very young with an average age of only 21, were highly trained and exhibited exceptionally high esprit de corps in a theater of war punctuated by high risks, incredible dangers and harsh conditions. difficult work. Among them were the future Avenger Patrick Macnee, who became a household name in the 1960s, the second Dr Who, Patrick Troughton, famous environmentalist Sir Peter Scott and James Bond director Guy Hamilton.

Night fighters also highlight the vital role played by the Womens’ Royal Naval Service (WRNS) which managed and operated the 23 coastal bases all around the UK coast from which the ships operated. Land based bases were also located across the world, from Iceland to the Far East.

“The Night Hunters is an extraordinary opportunity to shine a light on a hitherto unknown part of the history of the Royal Navy. Their service has all the elements of an amazing story, but unfortunately they often paid off with the ultimate sacrifice. They were incredibly brave young men on board really pretty basic boats, loaded with fuel and ammunition, working at high speed, often under the cloak of darkness. Their service and sense of duty shivers down your spine and we are truly grateful to be working with the Coastal Forces Heritage Trust to open a gallery, so that their story can be shared.

“I am delighted that the Coastal Forces Museum is opening in the fall and that the Trust has thus achieved its main objective. This is an important milestone, the culmination of about ten years of planning, fundraising, lobbying and publicity. I take this opportunity to thank all of our loyal and generous supporters who have continued to support the Trust through long periods of uncertainty and often with little evident progress. I would also like to thank and pay tribute to our major partners, the National Museum of the Royal Navy and the Portsmouth Naval Base Property Trust. ”

Admission to the Night Hunters and Explosion Museum of Naval Firepower is included with a ticket to the historic Portsmouth Shipyard, which is jointly operated by the National Museum for the Royal Navy and the Mary Rose Museum. The joint ticket grants extraordinary access to world-class attractions based at the Portsmouth and Gosport sites, including the Royal Navy Submarine Museum, Gosport, HMS Victory, Mary Rose Museum and HMS Warrior.

For ticket details, including the Ultimate Explorer Ticket which grants 12 month admission to all attractions, visit www.historicdockyard.co.uk. The Portsmouth Harbor and Explosions Museum sites are supported by the Portsmouth Naval Base Property Trust, who are the owners and custodians of the historic estate and have worked with the NMRN to bring the Coastal Forces Gallery to life by repurposing the building and surroundings.

You must log in before you can do so! This is just a quick registration process to join the AMA network and completely free.