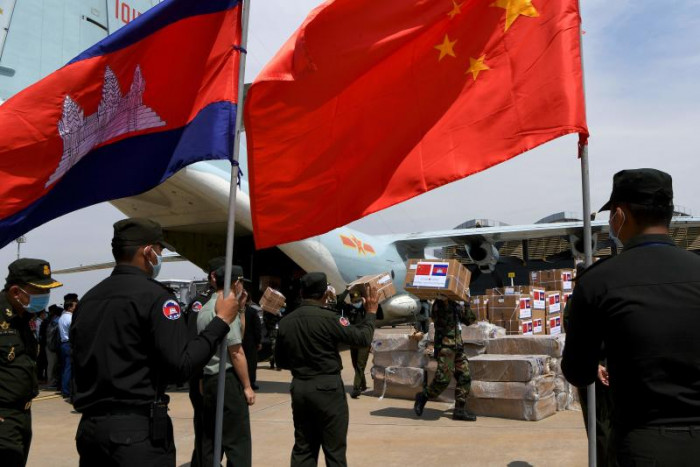 Cambodian soldiers carry aid, including medical supplies from the Chinese Ministry of Defense, to be used in combating the spread of the coronavirus, while others watch with national flags, at Phnom Penh International Airport in Phnom Penh April 25, 2020 (AFP Photo)

The Cambodian prime minister on Monday called on foreign powers to conduct military exercises in the country as he called for overseas funding to build a jetty and relocate an army training center.

But the strongman insisted the country would not allow a “foreign military base on its territory.”

The Wall Street Journal reported last year of a draft deal allowing China to dock warships and store weapons at Ream Naval Base near the coastal town of Sihanoukville.

Hun Sen – a staunch ally of Beijing – has previously denied the allegations, citing Cambodia’s constitution which prohibits any foreign military base within its borders.

“Anyone who wants to organize exercises on Cambodian territory, please come. We are opening the door,” Hun Sen said in Sihanoukville on Monday.

He said the country “would welcome any assistance from the United States, France, Japan and China” to move a military training center from Ream base to a “new location.”

The kingdom also aspires to build “a new pier to repair our warships and other transport vessels for our people,” Hun Sen said, without specifying where it would be located.

“Frankly, we need funds from China to build this one – but if you all want to donate money, we would welcome it,” he said.

China has provided billions of dollars in low-interest loans, infrastructure and investments to the poor Southeast Asian country.

Military exercises between China and Cambodia have also intensified in recent years – the most recent on counterterrorism took place in March.

The Ream base has sparked scrutiny for its strategic location in the Gulf of Thailand, which would provide easy access to the fiercely contested South China Sea – a key global sea route.

Beijing claims the majority of the resource-rich sea, rivaling six other claimant countries.