Allies worry as US considers downsizing military forces in Africa

DAKAR, Senegal – As extremist violence grows across Africa, the United States plans to reduce its military presence on the continent, a move that worries its international partners as they work to step up the fight in the tumultuous region of the Sahel.

Timing is particularly critical in the Sahel, the vast arid region south of the Sahara Desert, where militants linked to al-Qaida and the Islamic State group have stepped up attacks over the past six months. In Niger and Mali, soldiers have been ambushed and sometimes overpowered by hundreds of extremist gunmen on motorcycles. More than 500,000 people have been displaced by violence in Burkina Faso.

The pending decision is part of a global review by Defense Secretary Mark Esper, who is looking for ways to focus more on China and Russia.

“My goal is to free up time, money and manpower all over the world, where we are now, so that I can direct it” to Asia or return forces to the United States. to improve combat readiness, Esper said Monday after meeting with French Defense. Minister Florence Parly, who visited Washington to urge the United States not to reduce its forces in the Sahel.

Leading Republicans and Democrats have warned that such a move would undermine national security. They argue that cuts in Africa could cede influence over the booming continent of 1.2 billion people to China and Russia.

Talking about a possible troop reduction “reinforces the view in West Africa that the United States is not interested, that it does not see it as of strategic importance and that it will cut and flee and abandon their African allies, ”Judd Devermont, director of the Africa program at the Center for Strategic and International Studies, told The Associated Press.

The United States has about 6,000 people on the continent. In West Africa, Africa Command has a mandate to advise and assist, while in East Africa, where most of the American troops are located, forces also accompany African troops on mission.

More than 1,000 American soldiers are currently in the Sahel. The United States has also built a $ 110 million drone base in northern Niger.

Nigerian Information Minister Lai Mohammed urged the United States not to cut back, citing an increase in terrorism in Burkina Faso, Mali, Niger, Cameroon and Chad since the defeat of ISIS in Syria.

“So I think what we need now is more support,” Mohammed told the AP. “I’m not talking in terms of physical soldiers, American soldiers. But I think we need more support. Otherwise, we will inadvertently strengthen the hand of terrorists. ”

The impending decision of the United States comes as the former French colonizer promises more support than ever to the countries of the Sahel. France has already sent more than 200 additional troops to bolster its already 4,500-strong operation in the Sahel, and French Chief of Staff Francois Lecointre has said he will ask for even more troops.

The Sahel mission “is a classic case of burden sharing, where limited support from the United States capitalizes on a huge effort led by France and Europe,” Parly said, speaking alongside Esper Monday at a Pentagon press conference.

Parly joined senior Portuguese, Swedish and Estonian military officials on a visit to Niger, Chad and Mali last week to discuss how to proceed with an international counterterrorism coalition dubbed Takouba.

During a summit with West African leaders this month, French President Emmanuel Macron said he hoped to convince US President Donald Trump that the fight against global extremism “is also at stake in this region.” .

West African leaders at the summit said they hoped the United States would maintain its military presence in West Africa.

The heads of state of the G5 Sahel, a group which includes Niger, Mali, Burkina Faso, Mauritania and Chad, called for the continuation of American and French military engagement in the region and “pleaded for a strengthening of the international presence by their side, ”according to the summit’s closing statement.

The U.S. footprint in West Africa, where the cuts would most likely occur, is small compared to other regions. But the effect of its force presence, training programs, development aid and military assistance is significant, according to the leaders.

He underscored the need for a strengthened regional and multinational approach to violence and broader community support, saying African partners must lead the efforts. But a regional security force brought together by the G5 Sahel has struggled to fund its efforts and end the violence.

The G5 Sahel force will now focus most of its efforts in the tri-border region between Niger, Mali and Burkina Faso, targeting the Islamic State of the Greater Sahara, Parly said.

However, progress in the Sahel has been minimal and the issues need to be addressed by these regional governments, Deputy Secretary of the African Affairs Division of the US State Department Tibor Nagy said on Monday during a telephone press briefing. .

“The United States is actively involved through a number of programs in the Sahel region,” Nagy said. “It takes political will to fight terrorism.

It is also unclear how the newly built drone air base in northern Niger will be affected. Last week, the United States handed the Nigerian Air Force a C-130 hangar at Nigerian Air Base 201.

Colonel Abdoul Kader Amirou, Deputy Chief of Staff of the Nigerien Air Force, said the hangar would strengthen the capacities of the armed forces and “strengthen joint actions between the Nigerien and American forces”.

Associated Press editors Robert Burns in Washington, Andy Drake in London, and Thomas Adamson in Paris contributed to this report. 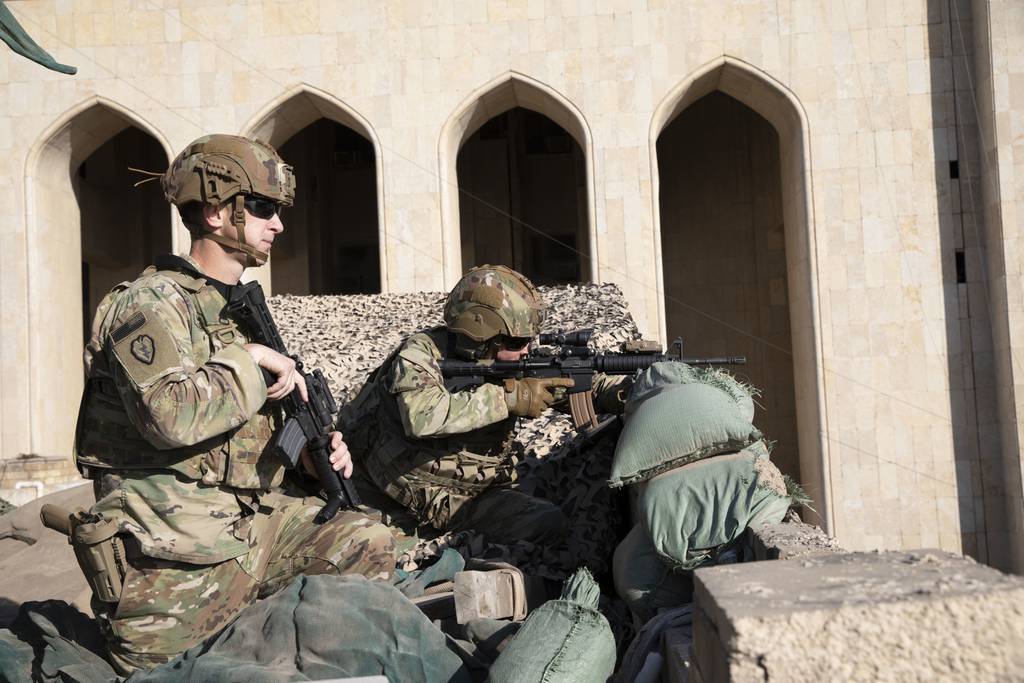 US leaders reject Iraqi demands for withdrawal of all military forces

Secretary of State Mike Pompeo said on Friday that US military forces were not preparing to withdraw completely from Iraq, but may downsize in the coming months as officials reassess ongoing missions there.

The comments came in response to Iraqi Prime Minister Adel Abdul-Mahdi’s request that the United States send delegates to prepare for the full withdrawal of US military forces, following an Iraqi parliament vote last week to oust foreign troops.

“The Prime Minister said that US forces had entered Iraq and drones were flying in its airspace without permission from Iraqi authorities and that this was a violation of bilateral agreements,” Prime Minister said. minister in a statement obtained by the Associated Press.

US rejects Iraqi request to work on troop withdrawal plan

The acting Iraqi prime minister asked Washington to draw up a roadmap for a US troop withdrawal, but the US State Department flatly rejected the request on Friday, saying the two sides should instead discuss how to “Re-engage” in their partnership.

But Pompeo, during a White House briefing on Friday morning, characterized the diplomatic request differently, saying he sees it as part of ongoing discussions about the role of US troops in ongoing missions to counter the fighters. of the Islamic State.

“We are happy to continue the conversation with the Iraqis on the right structure for our mission,” he said. “We went there to carry out a training mission to help the Iraqi security forces succeed and to continue the campaign against ISIS… We will continue this mission.

But Pompeo added that with recent successes against ISIS, the United States may be able to continue this work “with fewer resources.” He added that the increase in NATO troops in the region could also lead to a decrease in US personnel there.

About 5,000 US troops are currently stationed in Iraq to assist and train Iraqi security counterparts to combat the Islamic State group.

State Department officials said any delegation sent to Iraq in the coming days “would be devoted to discussing how best to re-engage our strategic partnership – not discussing troop withdrawal.” Defense Ministry officials have also publicly stated that they are not preparing for a large-scale troop withdrawal from the country.

Discussions over levels of US forces in Iraq have intensified in recent days after President Donald Trump’s decision to order an airstrike to kill Iranian force commander Quds Qassem Soleimani near Baghdad International Airport on the 3rd January.

Iraqi officials were not informed in advance of the attack, and many political leaders denounced the action as a violation of Iraqi territory. In a non-binding vote, MPs ordered the Iraqi government to formally request a withdrawal.

The White House issued a statement on Friday describing new economic sanctions against Iran and defending the airstrike as a necessary step to prevent future violence against America.

“The Iranian regime has threatened the military, diplomats and civilians of the United States, as well as the citizens and interests of our allies and partners, through military force and proxy groups,” the statement said. “The United States will continue to fight the destructive and destabilizing behavior of the Iranian regime. “

Pompeo said Trump was responding to “looming” threats from Iran and Soleimani “against US facilities, including US embassies and military bases” across the region.

“It was going to happen, and American lives were in danger,” he said. “We would have been guilty of negligence… if we had not recommended that the President take this step. He made the right choice. And America is safer because of it.

Protests by various factions in the Iraqi parliament were scheduled throughout Friday to criticize the United States for its continued military presence there.

But the demand for withdrawal is not universal. Sunni and Kurdish lawmakers opposed the parliament’s resolution. The Sunnis see the American presence as a bulwark against the domination of the Shiite majority and Iran, while the Kurdish security forces have benefited from American training and assistance.

Journalist Shawn Snow and The Associated Press contributed to this story. 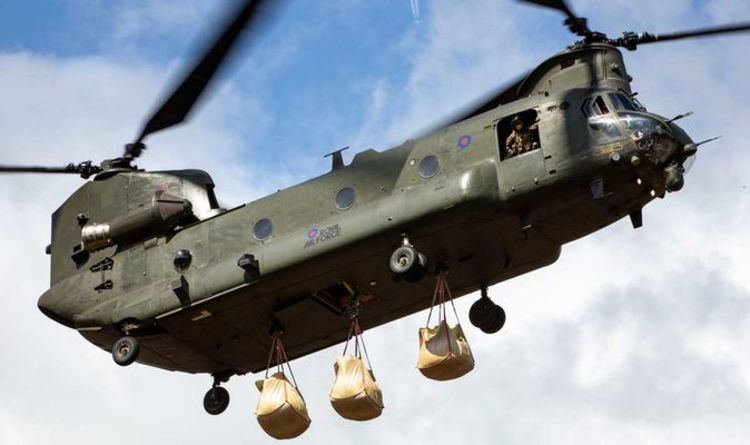 The Defense Ministry (Mod) put five Boeing Chinooks on hold within range of Baghdad, after Iranian forces responded to the subpoena of General Qassem Soleimani by launching a series of attacks on US bases in Iraq, reports the Times. The fleet is expected to join four RAF helicopters already located in the Kurdistan region of Arbil, in northern Iraq. The heavy lift aircraft can carry up to 55 soldiers or 10 tons of mixed cargo and is 30 m long.

Defense Secretary Ben Wallace said helicopters had been placed “on hold to help if the need arose”.

The Ministry of Defense has already deployed around 20 military planners and liaison officers to the British Embassy in Baghdad.

Britain has around 400 troops in the region to aid forces in the battle against Islamic State.

Military personnel had been stationed at three main bases – Camp Taji near Baghdad, Union III in Baghdad and Erbil in Iraqi Kurdistan.

Iranian Foreign Minister Mohammad Javad Zarif said on state television that Iran’s attack on US bases in Iraq was “self-defense”.

Iranian Supreme Leader Sayyid Ali Hosseini Khamenei has called for an end to America’s “corrupt presence in the region”.

Iranian President Hassan Rouhani also called for the departure of US forces and called General Soleimani a hero.

To questions from the Prime Minister, Boris Johnson called on Iran not to repeat the “reckless and dangerous attacks”.

“Iran should not repeat these reckless and dangerous attacks, but rather must pursue urgent de-escalation. “

He added: “We are doing everything possible to protect British interests in the region, with HMS Defender and HMS Montrose operating in an enhanced state of readiness to protect navigation in the Gulf. “